Get started with ONNX Runtime for Windows

The ONNX Runtime Nuget package provides the ability to use the full WinML API. This allows scenarios such as passing a Windows.Media.VideoFrame from your connected camera directly into the runtime for realtime inference.

The WinML API is a WinRT API that shipped inside the Windows OS starting with build 1809 (RS5) in the Windows.AI.MachineLearning namespace. It embedded a version of the ONNX Runtime.

In addition to using the in-box version of WinML, WinML can also be installed as an application re-distributable package (see Direct ML Windows for technical details).

ONNX Runtime is available in Windows 10 versions >= 1809 and all versions of Windows 11. It is embedded inside Windows.AI.MachineLearning.dll and exposed via the WinRT API (WinML for short). It includes the CPU execution provider and the DirectML execution provider for GPU support. 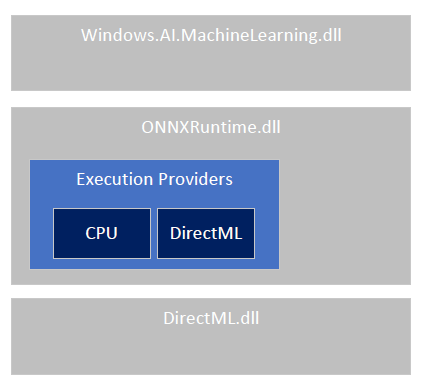 You can choose to use either the WinRT API or the C API.

Using the NuGet WinRT API with other C-API distributions

Any code already written for the Windows.AI.MachineLearning API can be easily modified to run against the Microsoft.ML.OnnxRuntime package. All types originally referenced by inbox customers via the Windows namespace will need to be updated to now use the Microsoft namespace.

Should I use the in-box vs NuGet WinML version?

To detect if a particular OS version of Windows has the WinML APIs, use the IsApiContractPresent method. This can be called from either UWP or native apps.

If the OS does not have the runtime you need you can switch to use the redist binaries instead.